What you’ll find under the sea!

By sailwild|July 23, 2020|Blog|Comments Off on What you’ll find under the sea!

Our area is a premier destination for snorkeling, so when you join one of our snorkeling sails you will come across a variety of colorful sea creatures that are native to our coast. Read below to find out what you may see on this aquatic adventure.

Blue crab: While there are more than sixty varieties of crab in the Gulf Coast waters, the blue crab is Alabama’s top choice because they are delicious to eat! The meat is soft, sweet and juicy all the way down to the claws.

Stingray: Dozens of species of rays are found in the Gulf of Mexico, but the most commonly encountered are the cownose ray, southern stingray and Atlantic stingray. Though stingrays defend from predators by striking with a poison stinger fixed to the tail, they are mostly peaceful creatures that typically only attack when stepped on or harassed. 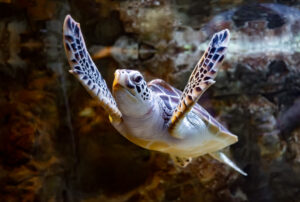 Gulf fish: Flounder, redfish, speckled trout, snapper and so many more . . . the species of fish you may spot is almost endless.

Sea turtles: In our waters, you are likely to spot loggerheads, Kemp’s ridleys, and green sea turtles. The loggerhead is the most recognizable and the largest, sometimes weighing in at up to 500 pounds!

Get ready to grab some gear and get in the water to discover the variety of fascinating marine life that calls our waters home!